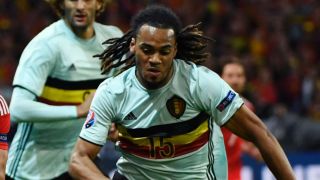 Manchester City need to learn fast if they are to successfully adapt to Pep Guardiola's tactics, says Jason Denayer.

Defender Denayer represented Belgium at Euro 2016 and joined up with his City team-mates in China, where they are preparing to face Borussia Dortmund on Thursday, last week.

Having got his first taste of life under the new boss, the centre-back was effusive in his praise for the Catalan manager, but acknowledged there is still work to be done.

"Pep is a very good person, he speaks a lot and you learn a lot. He makes you confident so it's very good to train with him," Denayer, 21, told the club's official website.

"He has his own tactics, he asks us to do different things so we start to learn. It's completely different and it's new, so we need to learn fast and we will try to do it.

"I'm happy to be back here. You never know what's going to happen – it depends on the coach and me.

"I try to do my best in training and we're going to see if I’m part of the new manager's plan or not."

Denayer spent last season on loan at Galatasaray and feels the experience will hold him in good stead at City.

"I learned a lot on the mental side at Galatasaray because it's a club with a lot of expectation and that brings pressure," he added.

"I played a lot at right-back and I learned a lot in that position – it was a new one for me. Now I'm happy to play in that position because I know more about the game but I see myself as a centre-back first and foremost.

"I think the supporters are very honest – there it's a bit difficult because Galatasaray expect to win everything and this season was not the best one.

"In the Premier League, in England, it's different – the supporters know that you can't win every trophy but Galatasaray expect to."