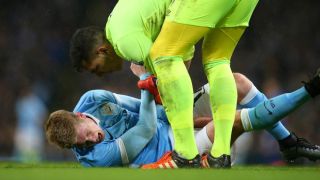 Manchester City star Kevin De Bruyne is set for at least six weeks out of action and will miss the League Cup final against Liverpool as a result of his injury, his agent Patrick De Koster has said.

The Premier League club are yet to officially announce the results of their scan, but the Belgium attacking midfielder has reportedly injured ligaments in his knee and ankle.

De Koster revealed more tests are to be carried out, but thinks six weeks is the minimum period De Bruyne, 24, will miss – an absence that would keep him out of the Wembley final against Liverpool on February 28 and the Champions League last-16 first leg against Dynamo Kiev.

"Kevin will be out for at least six weeks, but it is too early to know more at this stage," De Koster said to the Guardian.

"He is confident. Of course he is a bit sad that he will miss so many important games like the Capital One Cup Final and Champions League, but Kevin would not be Kevin if was not already thinking about playing again for City."

The nasty nature of De Bruyne's injury sparked fears of whether he will play again this season and be fit for Euro 2016 in the summer.

De Koster would not guarantee his client would be able to play in the tournament, insisting further tests were still required to determine the full extent of any damage.

When asked about Euro 2016, the player's representative continued: "You never know. I am not going to discuss that at the moment. All Kevin can do now is concentrate on getting better and we will see.

"He will have more tests over the next couple of days and then we should know more. I have known Kevin since he was 15 and he has never had such a bad injury before. But we hope he can come back quickly to help City."