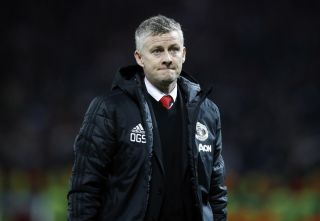 Romelu Lukaku needs to have a foot issue assessed as Manchester United caretaker boss Ole Gunnar Solskjaer prepares to bounce back from his first domestic defeat and reach the FA Cup semi-finals.

Last weekend saw the high of the jaw-dropping Champions League win at Paris St Germain followed by a first Premier League loss, with Arsenal emerging 2-0 victors at the Emirates Stadium.

Lukaku aggravated a foot complaint against the Gunners and is a doubt for Saturday evening’s FA Cup quarter-final at Wolves, although Solskjaer’s injury issues are at last beginning to ease.

“He’s had a sore foot this week so he’s being assessed, so hopefully he’ll get through today,” Solskjaer said of Lukaku.

“Phil Jones is back. There’s been so many players out.

Jones has been out for five weeks through illness while Lingard and Herrera have missed recent games with hamstring issues. Mason Greenwood will be assessed after illness ahead of an FA Cup tie that Ashley Young is suspended for.

Juan Mata, Antonio Valencia and Matteo Darmian are also unavailable while Alexis Sanchez is sidelined with a knee issue.

“He’s coming back on Sunday,” Solskjaer said of Sanchez. “He’s not been on grass yet.

“He’s been seeing his people in Barcelona so he’s still a few weeks away, so if we get to round about Everton, City, Chelsea, that period, he probably will be available.”

Solskjaer overlooked a question relating to a recent report that Sanchez could move on and was hardly wholehearted when asked if United would one day see the best of him.

“Yeah, I hope so,” the caretaker boss said. “You can never be 100 per cent sure, of course, but Alexis is such a determined lad.

“He loves football so I’m sure he is doing everything he can (so that) when he comes back now, he’s going to show his best side.”

Sanchez was in Barcelona – United’s Champions League quarter-final opponents – as his team-mates lost at his former club Arsenal last weekend.

It was the first time Solskjaer had been defeated in a match in domestic competition, but the caretaker boss was far from downhearted.

“You’re always measured on results but we played a good game against Arsenal,” he said.

“We have played so much worse and won games and that’s the strange thing in football when you’re a manager, you can look behind the result and say that was a good performance, we didn’t get what we deserved. Sometimes you can say that was a bad performance but we won, then you are happy.

“It’s so strange, the Arsenal one. Very disappointed in the result, it hurts more than anything, but it’s not like we can’t look at the performance and say we were s*** because we weren’t.”