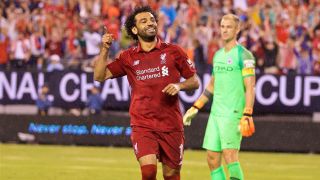 Mohamed Salah made a goalscoring return as Sadio Mane's last-gasp penalty secured a 2-1 win for Liverpool against Manchester City at the International Champions Cup in New Jersey.

All eyes were on Salah at a wet MetLife Stadium, where the reigning Premier Golden Boot winner and Player of the Year started on the bench following a World Cup affected by a shoulder injury sustained in the Champions League final loss to Real Madrid.

And the Egyptian phenomenon – who scored 44 goals in all competitions last season – scored less than a minute after his introduction in the second half, which turned Wednesday's game on its head.

Salah, with the suggestion of offside, headed past the helpless Joe Hart to cancel out Leroy Sane's opener after the German put Manchester City ahead six minutes later, while the Liverpool star struck the woodwork moments later.

Sadio Mane wasted two great chances during the closing stages but it did not matter as he stepped up and converted a 94th-minute penalty after Solanke was bundled over.

Missing a host of World Cup stars, Pep Guardiola's City line-up was headlined by club-record signing Riyad Mahrez and Claudio Bravo, with Sane and Bernardo Silva among the substitutes following a 1-0 defeat against Dortmund.

Chances were few and far between in the first half, though City had an opportunity to break the deadlock in the 12th minute when Lukas Nmecha was played in brilliantly by Mahrez but Karius made a good save before the rebound was blazed over the crossbar.

The introductions of Sane and Mane brought the match to life in the second half as Liverpool almost made the breakthrough within three minutes of the restart.

A last-ditch intervention off the line denied Mane, who almost bundled the ball into the net following chaos in the penalty area.

City then had a golden opportunity to open the scoring when Luke Bolton left Fabinho in his wake and slid a ball across the six-yard box but Sane's shot was saved by substitute keeper Caoimhim Kelleher.

Sane was not to be denied a minute later as he showed outstanding pace and composure to put the Premier League champions ahead after gliding past Van Dijk and Clyne before finishing calmly – moment of magic which left Klopp shaking his head.

That prompted the addition of Salah just past the hour-mark and he restored parity within seconds of his arrival – guiding a header beyond Hart.

City had no answer to Salah, who almost made it two but his goal-bound header was cleared away for a corner, while he rattled the crossbar moments later after finding space in behind Guardiola's defence.

With penalties looming, the referee pointed to the spot in the fourth minute of stoppage time when Solanke was clumsily fouled in the back by Tosin Adarabioyo following Salah's chipped pass and Mane made no mistake against Hart.