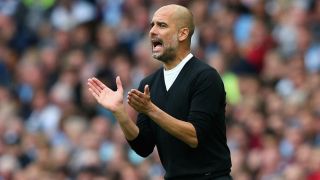 Kyle Walker believes Manchester City will prove unstoppable if they keep up their current levels under Pep Guardiola.

City have won six consecutive matches in all competitions, scoring 24 goals and conceding just two in the process.

Guardiola's men are at home to Shakhtar Donetsk in the Champions League on Tuesday before a huge away game against Chelsea on Saturday and Walker is feeling confident.

"Hopefully we can just keep performing," the defender told reporters. "The manager always still wants more from us and that's good - to keep pushing us.

"If we keep doing the basics right, and keep performing at the level we're performing at, hopefully we will be a force that won't be stopped.

"We've got a lot of game winners and fantastic talents. It is just about consistency.

"If we keep playing at the level we are playing at I don't think we will come across many opponents that will cause us many problems with the strike force we've got and, more importantly for me, [if we are] keeping clean sheets.

"We need to keep listening to the gaffer and his tactics, and we hope that will see us across the line."

Life under Guardiola is proving enjoyable for Walker, with City's full-backs like the England international, Benjamin Mendy and Danilo being given freedom to get forward.

Walker added: "One of the big reasons for signing here was that the gaffer likes to play the way I like to play - with attacking full-backs.

"The standard of full-backs is very high as well. He is improving me as a player. It is going to push all three of us. Dani can play left or right, and Mendy and I are occupying each side.

"It is a good dressing room to be around. We all expect high standards from each other."