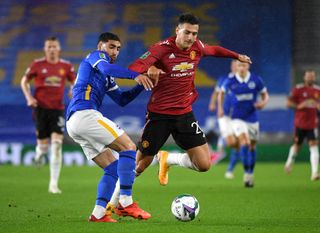 The 21-year-old right-back will stay with the Serie A club for the rest of the season, United announced on Sunday.

Dalot joined the Premier League club from Porto in 2018 when fellow Portuguese Jose Mourinho was manager.

He has made 35 first-team appearances for United, but only one this season as Ole Gunnar Solskjaer has also used Aaron Wan-Bissaka and Timothy Fosu-Mensah at right-back.

Dalot wrote on Twitter: “I’ve learned a lot in these 2 years. I’ll be rooting for you, reds”.

Dalot joins team-mate Andreas Pereira in leaving United for a loan deal in Italy this season.