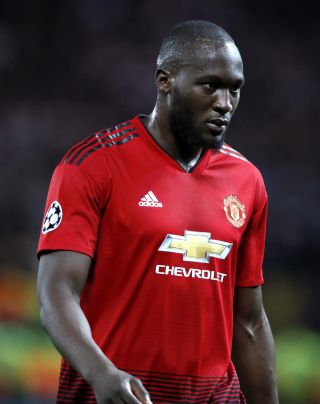 Romelu Lukaku is set to miss Manchester United’s FA Cup quarter-final against Wolves with a foot issue, according to Belgium manager Roberto Martinez.

Ole Gunnar Solskjaer is looking to bounce back from his first domestic defeat as caretaker manager by progressing at Molineux on Saturday evening,

United’s list of absentees have shortened ahead of the match, but Lukaku may well be missing after aggravating a foot complaint in last weekend’s 2-0 loss at Arsenal.

Solskjaer said the 25-year-old was complaining of a “sore foot this week so he’s being assessed, so hopefully he’ll get through (the session) today” – comments soon followed by Martinez seemingly ruling the striker  out.

The Belgium manager said Lukaku “is going to miss this game with his club this weekend” and that the issue that would be assessed by the national team on Monday, having selected him for their upcoming international fixtures

“Well, at the moment it is a 50-50 situation (to be involved with us),” Martinez told a press conference.

“We have a really good relationship with Manchester United.

“At the moment, they feel that he cannot be involved at the weekend.

“But we all feel quite confident that maybe it is a situation where every day, or every 24 hours, it can change a lot.

“So, on Monday we’ll have a clear idea and we’ll assess him and we will make a decision based with how he feels then.”

While Lukaku may miss out, Phil Jones is back after five weeks out through illness, plus Jesse Lingard and Ander Herrera have been training following hamstring issues.

Mason Greenwood will be assessed after illness ahead of an FA Cup tie that Ashley Young is suspended for.

“He’s coming back on Sunday,” Solskjaer said of Sanchez. “He’s not been on grass yet.

“He’s been seeing his people in Barcelona so he’s still a few weeks away, so if we get to round about Everton, City, Chelsea, that period, he probably will be available.”

Solskjaer overlooked a question relating to a recent report that Sanchez could move on and was hardly wholehearted when asked if United would one day see the best of him.

“Yeah, I hope so,” the caretaker boss said. “You can never be 100 per cent sure, of course, but Alexis is such a determined lad.

“He loves football so I’m sure he is doing everything he can (so that) when he comes back now, he’s going to show his best side.”

Sanchez was in Barcelona – United’s Champions League quarter-final opponents – as his team-mates lost at his former club Arsenal last weekend.

It was the first time Solskjaer had been defeated in a match in domestic competition, but the Norwegian was far from downhearted.

“You’re always measured on results, but we played a good game against Arsenal,” he said.

“We have played so much worse and won games and that’s the strange thing in football when you’re a manager, you can look behind the result and say that was a good performance, we didn’t get what we deserved. Sometimes you can say that was a bad performance, but we won, then you are happy.

“It’s so strange, the Arsenal one. Very disappointed in the result, it hurts more than anything, but it’s not like we can’t look at the performance and say we were s*** because we weren’t.”