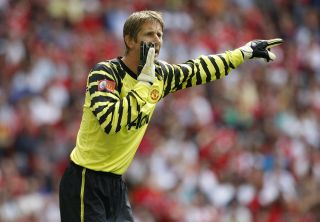 David De Gea has signed a new four-year contract at Manchester United which will keep him at the club until 2023.

The Spaniard moved to Old Trafford from Atletico Madrid in 2011, meaning this new deal will see the goalkeeper bring up a decade at United.

To mark this, the PA news agency has taken a look at the five best shot-stoppers to ever don the gloves for the Old Trafford club.

Often referred to as the ‘Hero of Munich’ for his role in rescuing survivors of the air disaster, Gregg was also a phenomenal goalkeeper for Manchester United and Northern Ireland.

Gregg helped pull survivors from the wreckage of the crash at Munich Airport in 1958 which killed 23 people including eight United players.

He pulled Sir Bobby Charlton out alive and the two of them are the last remaining players from that ‘Busby Babes’ squad.

Remarkably, Gregg returned to action within two weeks of the crash and just four months later he was voted best goalkeeper in the world for his performances during the World Cup in Sweden.

Stepney arrived at Old Trafford in 1966 from Chelsea when Matt Busby paid a then world-record fee for a goalkeeper of £55,000.

He went on to make 539 appearances, which is a record for a keeper at Manchester United. But the most famous of those games and the one which cemented Stepney’s place as a Red Devils icon was the European Cup final in 1968.

United beat Benfica that night at Wembley and they had Stepney to thank for sending the game to extra time as he produced a remarkable save to deny Eusebio with the game level at 1-1.

It was a save so good that Eusebio stood and applauded the man who has just denied him the winner. Stepney spent 12 years at Old Trafford, but that was the moment that defined his career.

The ‘Great Dane’ arrived at United in 1991 from Brondby and across the next eight years he cemented his place as arguably the greatest goalkeeper in Premier League history.

Schmeichel won five Premier League titles, three FA Cups, a League Cup and the Champions League during his time at United and was a crucial figure in their dominance during the 90s.

He played his last game for United in that Champions League final victory, ending on the highest note as the club clinched an unprecedented treble by beating Bayern Munich in Barcelona – a game in which he was captain in the absence of Roy Keane.

It says a lot about the greatness of Schmeichel that, for six years, United failed to replace him.

Despite a host of big-name keepers at Old Trafford, including Mark Bosnich and World Cup winner Fabien Barthez, the Dane left a hole Sir Alex Ferguson struggled to fill.

That changed in 2005 when Van Der Sar became the first signing of the Malcolm Glazer era at Old Trafford. Having established himself as one of the world’s best keepers at Ajax, Ferguson missed out on Van Der Sar in 1999 as the Dutchman chose Juventus.

But, having spent four seasons at Fulham, United finally got their man at the age of 34. He stayed at United for six hugely successful years which included four Premier League titles and the Champions League.

Van Der Sar saved Nicolas Anelka’s penalty in the shoot-out against Chelsea in the Champions League win in Moscow.

On his 27th birthday, here's @D_DeGea doing what he does best… #DaveSavespic.twitter.com/WZiXJccoWn— Manchester United (@ManUtd) November 7, 2017

After Van der Sar’s departure in 2011, the pressure was on Ferguson not to repeat the troubles they had replacing Schmeichel.

He took a gamble on a raw talent from Atletico Madrid. It initially looked a mistake, as De Gea made a number of high-profile errors which drew criticism from the likes of former United defender Gary Neville and resulted in him being dropped in favour of Anders Lindegaard.

But De Gea blossomed into one of United’s finest keepers. The Spaniard has now made over 360 appearances during his seven years at Old Trafford and has been the club’s most important player – particularly since Ferguson’s retirement.

He became the first keeper to win the Sir Matt Busby award for the club’s Player of the Year in 2013/14 and the first player to win it three years in a row for the next three seasons.

De Gea won it again for a fourth time in May 2018 and his new deal, after years of speculation linking him to Real Madrid, is fantastic news for United.