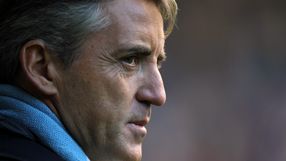 What fans are finding increasingly hard to comprehend is how a miserly 15 goals in 12 league games from an expensively assembled team cannot be considered boring and why their manager is not talking about that team challenging for the league title.

"If the Premier League finished tomorrow, I am happy," Mancini told a news conference. "Our target is to get to the Champions League. This is our target at this moment but we can change our target during the season."

They lie fourth in the Premier League, seven points adrift of leaders Chelsea, which puts them on course for their target of a berth in Europe's premier club competition, which they missed out on last season by finishing fifth.

The question is, having spent over 300 million pounds on players over the past two years, should doing just enough be acceptable or should the club aim higher.

Mancini would send out an altogether different message if, instead of repeating his belief that Chelsea will win the title, he spoke of City running them close. Or if he spoke of wins being better than draws.

"Fourth would be good but... third, second or first would be even better. Moral of the story? Try to win every game rather than trying to lose", said one posting, while others said: "Where is the ambition?" or "Typical negative comment!".

The drab 0-0 stalemate against city rivals Manchester United on Wednesday laid bare City's strengths and weaknesses. The defence, the league's second best behind Chelsea with 10 goals conceded, was made water-tight by defensive midfielders Yaya Toure and Nigel de Jong and holding midfielder Gareth Barry but left little room for anything creative.

Carlos Tevez, often a one man band left to run tirelessly to set up chances and finish off moves, cannot be in two places at once and he sorely lacked a strike partner against United.

Mancini dismissed accusations that the result was a snooze-inducing bore and said matters had not been helped by the absence of suspended forward Mario Balotelli, who was serving the first of a three-match ban.

The Italian will miss Saturday's game at home to Birmingham City but since the season was two months old by the time he made his league debut after injury, it is hardly a new problem and Mancini has other expensively acquired forwards like Emmanuel Adebayor and Roque Santa Cruz who have seen little action.

"We are missing Mario, he scored two goals against West Brom and he defended as well as attacking. It would be different if we could play him, but unfortunately we cannot," said Mancini of their next league game.

"It will be a difficult game, I watched them play Stoke the other night and they are a good side, with a good manager. Playing every three days is tiring, and they played a day before us so they may have recovered more than us."