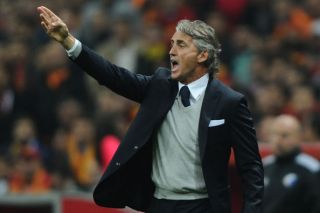 Felipe Melo, Wesley Sneijder and Didier Drogba were on the scoresheet in the first half as the Turkish side took control of their Group B clash at the Turk Telekom Arena in Istanbul.

Claudemir scored a consolation goal late on for the visitors, who are bottom of the group, as Gala sit second to Real Madrid.

Mancini was thrilled with the way his side played in the opening 60 minutes and felt fatigue cost them an even bigger win.

"I'm very pleased with the first 60 minutes of the game. We played very well but after that our physical condition dropped," the Italian coach said.

"I want to thank our supporters, they were magnificent and their support is amazing."

With a perfect three wins from as many matches, Real Madrid top the group ahead of Galatasaray (four points), Juventus (two) and Copenhagen (one).

Mancini has already set his sights on the final matchday, when Galatasaray host Juventus on December 11.

"This is a difficult group. After the first match our situation was very difficult but in last two games we have improved our position," the former Manchester City manager said.

"But our rivals are Juventus and Real Madrid and they're both very strong teams. We'll do our best and we'll try to get the chance to advance to the next round in our last match against Juventus."