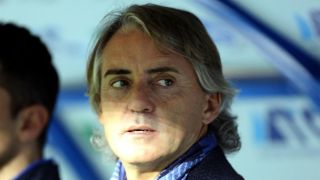 Roberto Mancini felt a half-time tactical tweak helped Inter to see out a 1-0 Serie A victory at Empoli.

The league leaders returned to winning ways having lost 2-1 at home to Lazio before the mid-season break as Mauro Icardi scored the only goal on the stroke of half-time.

That did not mean Mancini was satisfied during the interval and he conceded afterwards his team were second best during the opening 45 minutes.

A subsequent positional switch between midfielders Geoffrey Kondogbia and Marcelo Brozovic gave Inter more control of the contest, according to their boss.

"In the first half Empoli did better than us," Mancini said.

"In the second half we were much better. Brozovic and Kondogbia swapped position and have done well.

"I always though Mauro could make a difference. I'm sure of his quality."

Mancini reserved praise for his opposite number Marco Giampaolo, whose team sit eighth in Serie A, having seen their four-match winning streak come to an end.

"Empoli is a difficult place to come and they are a team that plays well," he added.

"Giampaolo is doing a great job.

"The 1-0 was enough and we had a chance to double our lead, while our mistakes meant we risked something."