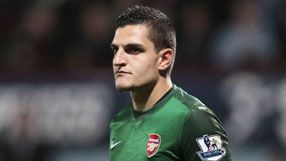 The young Italian, who has been linked with a move to Napoli, told Arsenal's official website that he was not concerned with Arsenal's start, that began with goalless draws against Sunderland and Stoke City.

"I am pleased with our start to the season. The team is doing great, we had [many of] the big games already," he said.

"It's not easy because every game in the Premier League and Champions League is a big game for this club, so you need to have the right standard and you need to prove to everybody what you've got."

And despite recently losing at home to Chelsea and drawing at Manchester City, the 24-year-old is satisfied with the club's recent results, with the Gunners coming from behind to triumph at West Ham United last time out.

"We had a few good wins and a few draws away, and not many other teams will get draws at Man City or a win at West Ham. It is not easy to win at Liverpool, as well. I think we have started the Champions League well too, the team has got a good base to kick on from. I am looking forward to some big achievements."

Arsenal lost the services of Robin van Persie and Alex Song in the summer to Manchester United and Barcelona respectively, but Mannone believes the Gunners still have strength in depth following the arrivals of Lukas Podolski, Olivier Giroud and Santi Cazorla, who has adapted to Premier League life seamlessly.

"We have a good solid squad and I think we can go for it. I have no doubt that if we keep our focus and we keep our mentality, it's not a doubt that we are going to challenge for the title.

"This is a club that is made for victories, it's not a club that just wants to do well and get the third or fourth place. This club wants to win trophies and I wish that I can give my help for this team to do it."