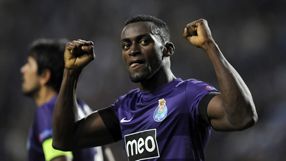 Martinez's stunning backheel against rivals Sporting in the league might have become a YouTube hit, with almost 168,000 views, but fans will have taken greater joy from his more straightforward winner in Wednesday's 3-2 Champions League victory over Dynamo Kiev.

With that easy tap-in, Martinez buried the memory of Porto's lacklustre European campaign last season and also the fans's feelings of longing for Falcao, who scored over 40 goals in two seasons before heading to Atletico Madrid.

Porto have found another Colombian predator.

"It's good when your goals give you victories. It was double joy," Martinez said.

His two goals put Porto firmly on top of Group A with a maximum nine points from three matches. They are three points clear of Paris Saint-Germain.

The Colombian, who seems to mostly score spectacular goals for Porto, through bicycle-kicks, backheels or volleys also proved he could do the bread and butter work of a forward and, above all, showed he is consistent in domestic competitions and Europe.

Martinez has eight goals this season in 10 matches.

Despite winning the league in his first year at the helm, coach Vitor Pereira's Porto have lived in the shadow of Andre Villas-Boas and Falcao, the architects of a memorable treble of Europa League, League and Cup in 2011.

Pereira's side's performances paled in comparison to Villas Boas's Porto and he often relied on the individual brilliance of Brazil's Hulk.

Brazilian Hulk left for Zenit St Petersburg last month and Porto's football seems to have improved as a result, with more balance and flow to it. They retained busy midfielder Joao Moutinho and have another Colombian in great form, 21-year-old winger James Rodriguez.

The Portuguese club's capacity to regenerate has won over pundits.

"Vitor Pereira's club have an absolutely extraordinary transfer policy in South America, giving them a significant advantage over other teams," Arsenal coach Arsene Wenger wrote in his online blog for Eurosport.

He said clubs tend to be drawn towards Brazil and its huge pool of talent, but that countries like Mexico, Colombia and Uruguay also offered great talent.