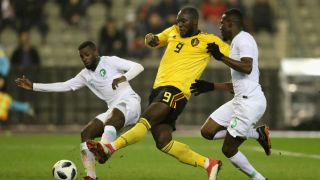 Roberto Martinez is enjoying Belgium's "boring" tag and insists Romelu Lukaku is not hell-bent on winning the Golden Boot at the World Cup.

Belgium's serene progress over the past few weeks has been built around a harmonious atmosphere in the dressing room – something that hasn't always been the case at major tournaments in the past – and Martinez is impressed at his players' focus ahead of their second Group G game against Tunisia in Moscow.

Asked how he created such a togetherness in the camp, Martinez said: "We want to be boring, we are a football team, we are not here to bring stories, fill pages for the wrong reasons.

"We care about each other, we aren't here to find blame, a way out, we are here to work hard and fulfil the potential we have.

"It's simplicity and basics, we have a real focus on being accountable. Injured or not, you have a role and it's very easy to assess your contribution.

"The focus from day one has been really good. I am sure it's been boring for you [the media] but I am pleased with the way we have been growing in the last few weeks."

R. Martínez : "The players know what they have to do to become a winning team. That is the focus"June 22, 2018

Lukaku scored twice in the 3-0 defeat of Panama on Monday but Martinez says the Manchester United forward has no designs on winning the individual prize for the leading scorer in Russia.

He added: "He will tell you, he's not here to be the top scorer at the World Cup, he's here to help the team to win and do his role. His role is of someone who can score goals.

"I know Rom well, I spent the biggest amount in Everton's history on a player because of the quality of his finishing, not because he was a player that could contribute things other than scoring goals.

"His role in the national team has become that. Maybe before there was confusion, when you ask players to do things they can't do it becomes confusing.

"I think Rom now knows his role. I wouldn’t expect any player to work towards an individual reward, the players know what they have to do to make a winning team."

Vincent Kompany and Thomas Vermaelen are lacking match fitness and won't be considered for the Tunisia clash, although the latter did take part in team training at Spartak Stadium on Friday.

Belgium coped comfortably without the experienced duo in their opening outing, but Martinez shrugged off talk of it being the best chance for their 'Golden Generation' to claim the Red Devils' first World Cup title.

"We qualified well, we're progressing well and now it's time, we are ready for tomorrow.

"We respect Tunisia, both teams will want to go out and win. That’s the only focus that’s worrying this squad.

"From the outside you can analyse it however you want. We want to improve on what we did against Panama. Then we want to grow in the next two games."