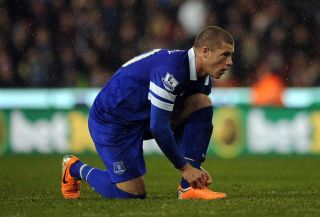 The 20-year-old midfielder has flourished under the Spaniard's tutelage at Goodison Park and has earned three England caps as a reward for his fine domestic form.

And Martinez is confident that Barkley, who suffered a broken toe in January, would be more than ready to answer Roy Hodgson's call to represent his country on the world stage.

"Ross has had such a demanding season, the most demanding in his professional career, and now he has come back really strongly for the final third of the season," Martinez said.

"What is important for us is to see Ross developing into an incredible footballer and the national team will have the opportunity to use his abilities.

"When that is going to happen is down to the England manager.

"He is ready to help if he is needed in the England set-up but we have real trust in the England manager to make the decisions he needs to make depending on what he needs in the squad.

"It will be something which wouldn't faze him that's for sure.

"Ross is enjoying every day's work and is developing into a fine footballer, potentially one of the best English talents we've seen for a long time but he is not the finished article.

"If he is going to be involved in the England set-up as he has been recently that will be a terrific experience and probably from the psychological point of view he will learn more than any other aspect.

"But if you ask Ross the only thing he has in his head is try to perform as well as he can for Everton and see the level of performance he can reproduce from now until the end of the season."