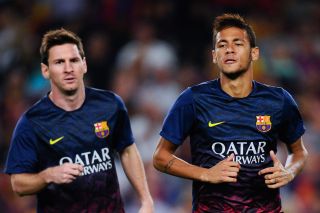 Neymar joined the Spanish champions for a fee of around €50 million from Santos in the close-season and immediately struck up a fruitful partnership with Argentina star Messi.

The 20-year-old Brazilian has scored just one La Liga goal since his arrival but produced a mature performance in Barca's 1-0 UEFA Champions League win at Celtic on Tuesday while playing up front in the role Messi - who injured his hamstring in last week's win at Almeria - would usually occupy.

Manager Martino was impressed with Neymar's display in his first Champions League away fixture but revealed that the forward should not feel that he has to emulate four-time world player of the year Messi.

"Neymar does not need to fill the hole left by Messi," Martino said. "Thinking about one player stepping into the shoes of another does not interest me."

He also stressed that the same applies to Cesc Fabregas and Alexis Sanchez, the other two prime candidates to start up front when Barca go looking for their eighth straight Liga win against Valladolid this weekend.

"Each player has to perform in accordance with their own possibilities, they have to be authentic rather than trying to disguise themselves as somebody else," he added.

Javier Mascherano, Isaac Cuenca and Ibrahim Afellay will all miss Saturday's game along with Messi.

However, Martino is confident that club captain Carles Puyol - who is yet to play this season due to a knee problem - should be fit for the trip to Osasuna on October 19.