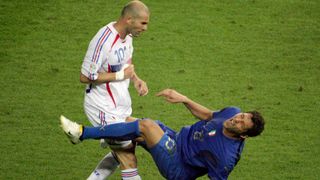 Marco Materazzi has sought to clarify what he said to Zinedine Zidane in the 2006 World Cup final on the 10th anniversary of the infamous head-butt.

Materazzi and Italy went on to win the decider 5-3 in a penalty shoot-out after France captain Zidane was sent off in extra time, in what was the last act of his professional playing career.

The now Real Madrid coach turned around and head-butted Materazzi after the Italian defender provoked him with inflammatory words.

Media reports suggested Materazzi had insulted Zidane's mother, but the 42-year-old insists that was not the case.

"What I said was stupid," Materazzi said. "But it didn't deserve that reaction.

"You would hear stronger words said on the streets of Naples, or Milan, or Paris, much more serious things.

"My mother died when I was 15, so I would never have insulted his.

"I spoke about his sister."