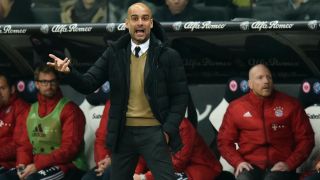 Former Bayern Munich star Lothar Matthaus has questioned Pep Guardiola's commitment to the club over his reluctance to agree a new contract.

The former Barcelona's coach's current deal expires at the end of the season and he has repeatedly claimed talks over a renewal are not a priority, sparking rumours of a potential exit.

Manchester City have long been linked as a destination for Guardiola, while Chelsea's dismal start to the season has seen him touted as a possible replacement for an under-fire Jose Mourinho.

Matthaus, however, cannot understand why Guardiola is refusing to pledge his future to the Bundesliga champions.

"What could be better for him than to be at Bayern? His every wish is fulfilled in Munich," Matthaus told Yahoo. "What more could he want?

"Bayern have never been so dominant. They have long since reached a new level of quality.

"He's already coached Barca, Real Madrid are taboo because of his origins.

"Of course, the English have a lot of money, but they lag behind in sporting terms at the moment."

Matthaus is confident, however, that the Bayern board have plans in place should Guardiola confirm his intentions to leave at the end of his contract.

"Bayern bosses are prepared for his departure," the World Cup-winner added.