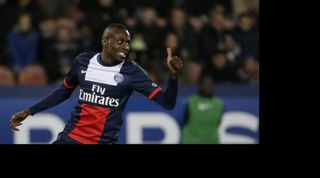 The Parisian giants suffered just three league defeats in 2013, and just one Ligue 1 loss this campaign has seen Laurent Blanc's men top of the table at the halfway stage.

Matuidi has become an integral part of the first-team picture at the Parc des Princes, making 19 league appearances this term.

After collecting the Ligue 1 title last season, the 26-year-old has now set his sights on more honours, including an assault on the UEFA Champions League.

"We want to keep the momentum of the first part (of the season) because the record so far is very positive," he told ladepeche.fr.

"There are trophies to win, if we can have several, it's good.

"And (also) the Champions League. There is no limit."

PSG are currently on their mid-season break, and are undertaking a training camp in Qatar where they will meet Liga giants Real Madrid in a friendly on Thursday.

And Matuidi believes the showdown will be a good test ahead of the resumption of league duties.

He added: "It's a big game. It's a game of prestige but should especially allow us to prepare for the future.

"We want to do well against quality players. We want to show that we have the qualities to compete."