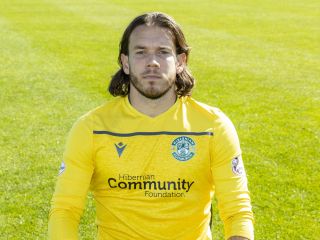 Hibernian goalkeeper Chris Maxwell insists they do not need to improve their performances despite sitting second bottom of the Ladbrokes Premiership.

Maxwell is convinced Hibs just need some luck to turn their displays into victories after drawing four games in a row, against Kilmarnock, Celtic, Aberdeen and Hamilton.

Hibs have two games at Easter Road in five days, with Ross County visiting on Saturday and Livingston making the short trip in midweek, before Paul Heckingbottom’s side face Celtic in the Betfred Cup semi-finals.

And Maxwell believes they can transform perceptions of their season.

“I don’t feel we need to improve our performance,” the on-loan Preston player said.

“I haven’t looked myself but I can imagine the statistics back up what we are talking about, that we are doing really well.

“Luck is maybe against us a little bit at the moment but when it comes around and when it’s our turn to be on the receiving end of it, we have just got to make sure we do the fundamentals right, we keep performing, we keep working hard for each other, and we’ll be fine.”

Heckingbottom has incurred the wrath of a section of supporters but Maxwell believes things can look very different soon.

“Any manager and any player in any team in any country in any league is going to be under pressure to perform,” the 29-year-old said.

“But you just have to look at how well we are actually playing. We are on an unbeaten run.

“If we win the next two games everyone is going to be talking about how long we are unbeaten. Say we get six points in the next week and then get through to a final, the conversation is going to be completely different.”

Hibs failed to take chances and build on leads against Aberdeen and Hamilton in their most recent games, and Maxwell is taking encouragement from dominating the starts of those matches.

“We’ve really been focusing on the positives from the last few weeks,” he said. “And there’s plenty of them. We’re playing well, if not getting the slice of luck that we deserve.

“We are unbeaten in however many games and we have played arguably the best teams in the league.