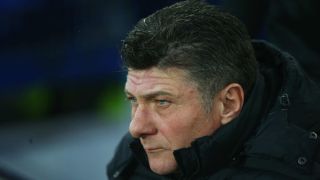 Mazzarri has been out of work since leaving Watford at the end of the 2016-17 season and will oversee his first Torino training session on Thursday.

The terms of the former Inter boss' contract have not been revealed by the club.

A Torino statement read: "The new coach – whom president Urbano Cairo receives with the most cordial welcome and with the best wishes of good work – will head the scheduled training session this afternoon."

Mazzarri led Napoli to Coppa Italia glory in 2011-12 and to second in Serie A the following season, claiming the Enzo Bearzot award for the best Italian coach in between.

Mihajlovic was let go in the wake of Torino's Coppa Italia quarter-final defeat to local rivals Juventus on Wednesday.