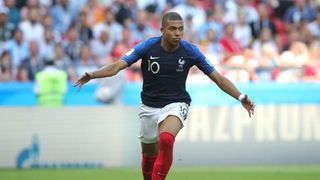 Kylian Mbappe looked like he was riding a scooter during his devastating display against Argentina on Saturday, his France team-mate Florian Thauvin has joked.

The Paris Saint-Germain forward struck twice in a thrilling last-16 clash to send Les Bleus into the World Cup quarter-finals with a 4-3 win, becoming the first teenager to score more than once in a World Cup game since Pele in 1958.

His pace was a constant threat to Jorge Sampaoli's side throughout and a surging 70-yard burst in the first half resulted in a penalty, which was converted by Antoine Griezmann.

Thauvin - who replaced Mbappe in the 89th minute for his first appearance at Russia 2018 - says the 19-year-old's brilliance could scarcely be believed by those on the sidelines.

"Honestly, sitting on the bench, we were a bit shocked because it was unbelievable," he said.

"He left from our side, from midfield, he ran 50 meters to obtain a penalty. It's incredible, it’s incredible.

"At some points, I was wondering: 'Is he riding a scooter on the pitch?'

"So, it's incredible. He has awesome qualities, and he uses them for the benefit of the team, and we celebrate them."

Mbappe will be in action again on Friday when France take on Uruguay in the quarter-finals.