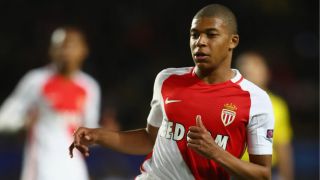 PSG had a stranglehold on Ligue 1, winning four successive titles but Mbappe and his youthful Monaco team-mates burst onto the scene to end that run on Wednesday.

France international teenager Mbappe was on target as Monaco claimed their first top-flight title since 2000 with a 2-0 win at home to Saint-Etienne.

The coveted 18-year-old took his goal tally to 15 in Ligue 1 but he issued a warning to French football and Europe amid the wild championship celebrations as the likes of Real Madrid and Manchester United circle.

"After the victory in Gambardella [last season], my mother told me: 'It's all very well, but it's with the kids'. I replied: 'Look, give me a year and I will do the same with the adults'," Mbappe told Canal+.

"For next year, I promise a better season. We must always set the bar high, otherwise we do not progress."

Mbappe opened the scoring at the Stade Louis II, beating the offside trap and racing onto Radamel Falcao's pass in the 19th minute.

"I am very happy," Mbappe said. "We wanted it from the beginning, and it's done.

"Now we're going to celebrate, and when the euphoria comes down, we'll have to get back to work: football is an eternal challenge.

"It will be necessary immediately to recover to be at least as efficient. Football goes fast but it can go quickly in both directions."