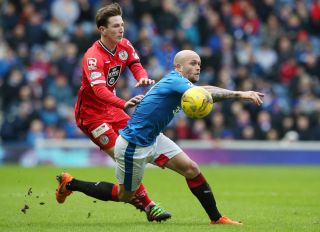 Kyle McAllister is determined to depart St Mirren as a top-flight club just over two years after leaving them bottom of the Ladbrokes Championship.

McAllister moved to Derby in January 2017 with the club staring relegation to Scotland’s third tier in the face.

The wide player’s transfer fee allowed Jack Ross to rebuild his squad and lead the club to an unlikely escape from the drop before winning promotion the following season.

McAllister returned to Paisley on loan in January with the club again bottom of the table but they have already avoided automatic relegation and can keep alive their hopes of averting a relegation play-off when they host Hamilton on Monday.

Only a win will do for the Buddies, who are four points behind Accies with two matches remaining of the Ladbrokes Premiership season.

And McAllister is out to do everything he can to ensure his hometown club stay up.

“It would be massive,” the 20-year-old said. “I left here when the club were struggling in the Championship. A season later they have done unbelievably well to get back up.

“The positive for me is to try and keep them up, that’s why I came here. I never came here just to play games and not care about results, because obviously St Mirren were a big part of me becoming a professional footballer.

“It would be unbelievable if we could stay up, it would be brilliant for me.”

Saints have shown the fight needed to give themselves a chance, coming from behind to take at least a point in five of their last six matches.

“We are leaving it late when we know we can do it before,” McAllister said. “But it’s good we know we can push in the last five or 10 minutes without giving up.

“The players have been brilliant at it in the last few weeks and we just work to the death.”

Manager Oran Kearney claims avoiding a play-off would be a bonus after Saints climbed from five points adrift in January to ensure second-bottom at worst two weeks before the end of the campaign.

McAllister said: “As soon as you pass the team below you, it’s just a positive, and I don’t think you can look back and say we’ve not done well enough.

“We just need to keep going the way we are going and hopefully get a result against Hamilton.

“There is no-one that folds, you don’t see anyone slacking off. We have a lot of young players and they are proving themselves.”