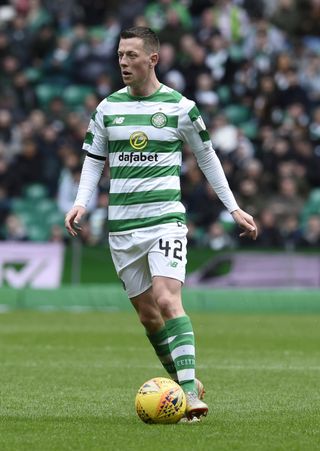 Callum McGregor insists the job Neil Lennon has done since taking over as interim Celtic boss has been underestimated.

The former Hoops captain and manager, who was handed the reins until the end of the season in February when Brendan Rodgers suddenly departed for Leicester City, has not lost in 10 games – winning seven.

There is a split among the Celtic fans, however, with regard to Lennon’s suitability to become permanent boss.

McGregor, who along with team-mate James Forrest will vie with Rangers pair Alfredo Morelos and Ryan Kent for the PFA Scotland player of the year award, said of Lennon: “He has come in, thrown himself into the job and been brilliant.

“He has fitted in amazingly well with the boys and not too much has changed.

“I think it was a case of him trying to stabilise the club and he has done a great job.

McGregor added: “The job he came into was massive. He had big shoes to fill, obviously, with Brendan going and with the club at one of the highest points it has ever been.

“So to come in with that pressure and to make sure the team continued winning, which is exactly what we have done.

“Although the performances haven’t been top notch, we are still winning, we are still in the hunt for two trophies, so I do think people are underestimating how good a job he has done.”

McGregor insists completing the triple treble would be a fitting tribute to Lisbon Lions Billy McNeill and Stevie Chalmers who recently died within a week of each other.

McNeill captained the Celtic side which won the European Cup in 1967, with Chalmers scoring the winner in the 2-1 victory over Inter Milan in Portugal.

The Scotland midfielder said: “It is a massive loss – two of the greatest players at the club.

“To lose one was obviously a massive loss but to lose two of them in a week, from such an iconic team in the history of the club, obviously the club was so upset.

“Obviously, we look after Saturday first and get over the line and then we have three massive games to finish and that would be the perfect ending in terms of a tribute for them as well.”

He said: “To be nominated by your fellow  professionals shows you are doing something right and people are taking notice of it.”