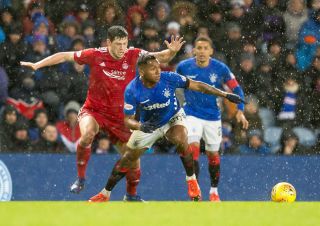 Aberdeen manager Derek McInnes has hailed Scott McKenna for blazing a trail into the first team for the club’s youth players.

The Scotland defender, 22, has made himself a key player for the Dons over the past 18 months and was joined in the starting line-up by teenagers Dean Campbell and Connor McLennan as Aberdeen knocked Rangers out of the William Hill Scottish Cup on Wednesday.

Scott Wright and Bruce Anderson have both played in close to 20 first-team games this season before being shipped out on loan to continue their development at Dundee and Dunfermline respectively.

And McInnes feels he has more scope to play young players than he did when he first arrived at Pittodrie.

“The young players have got to be good enough to play,” he said ahead of Saturday’s visit of Livingston.

“There’s a demand at Aberdeen and a demand on me to make sure Aberdeen are competitive. And that’s what we’ve been over the last six years – getting the club into second spot, into Europe and cup finals. That wasn’t happening before.

“There were plenty youngsters playing before but were they good enough to sustain their place in a successful Aberdeen team? No.

“I’ve not changed. What has changed is we’ve had some better youngsters and more mature performances from the younger ones.

“It’s given everyone confidence and McKenna’s been the catalyst of all that. McKenna has shown what can be done and it’s given others encouragement and the confidence to try and be that person as well and try to be that important player.

“It’s easy to get into an Aberdeen team and play on the periphery and play minutes here and there. But it’s not easy to stay in the team because of what’s expected.

“So it gives me great pleasure to see so many of the younger ones step up this season and show their capabilities, but the challenge is for them to sustain it.”

Victory at Ibrox made it eight wins and one draw from nine away games but such impressive form on the road contrasts with home disappointment.

Aberdeen have only won one of their last eight matches at Pittodrie and McInnes wants his side to take some lessons from their travels.

“I think what is clear, when we have lost the first goal here we have been chasing the game,” he said.

“We had the league game against Rangers, games against St Mirren and Hamilton, normally we have got to be in the charge of the game here. And we have chased the game and ultimately left ourselves open.

“We defend with real concentration on the road and that gives us the platform to go and win games and pick up points, whereas here, certainly in those three games, we chased the game and lost poor goals.

“It’s important we have more calmness to our home form. That isn’t always easy when the crowd are baying for you to go forward but there is a need to be that calm, confident team that we have shown on the road time and time again this year.

“And it’s getting the balance right between showing enough tempo and urgency, but the calmness and confidence to get the result rather than just chase it.”