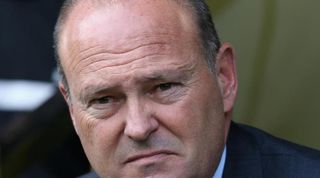 Saido Berahino grabbed the only goal of the game 11 minutes in at The Hawthorns, to give Mel his first home win, over three months after taking charge.

West Brom had been denied by stoppage-time equalisers in their previous two home fixtures against Cardiff City and Tottenham, both games ending in 3-3 draws.

And though delighted to end his home hoodoo, Mel demanded his players retain full focus in their final three games of the season to guarantee top-flight survival.

"There are nine points still to play for and we need to try and get three more," he said.

"If we had done against Cardiff and against Tottenham what we had done today and taken the ball into the corner we would have four more points.

"The job is only half done and if I'm given the opportunity I think I can do a good job here.

"In the last two games we really did deserve to be here talking about a West Brom victory but this wasn't the case.

"I'm extremely happy for the fans. They've once again shown that they're the best in the Premier League and we can all go home happy."