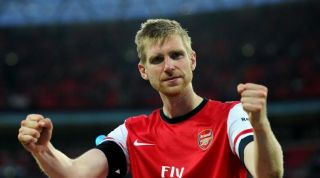 Arsene Wenger's side were top of the table at the start of February after defeating Crystal Palace but injuries to Aaron Ramsey, Mesut Ozil and Jack Wilshere derailed their campaign.

"I think we have the potential in the squad to be a very promising side in terms of title races," said the Germany international, who will be in action against Newcastle on Monday.

"If you can't keep all your leading players fit all the time it makes it a lot more difficult. That’s just a fact.

"I'm delighted we're getting some players back now. It is absolutely vital to have them back because we have suffered a lot in the second half of the season.

"Crucial injuries at the wrong time took away our ability to get a lift in games, so it is fantastic to have them back. Now you can see how important they are for us."

The London club appeared to have surrendered fourth position following a disappointing 3-0 defeat at Everton earlier this month.

But with Ramsey and Ozil returning, Arsenal have gone on to claim important wins against West Ham and Hull City, enough to stay one point above Everton.

Arsenal have not missed out on the Champions League for 16 seasons and Mertesacker is counting on the team's vast experience to get them over the line.

"We have to try to find nine more points in the league to make sure we keep that fourth spot," he said.

"We will try to use the experience we have had from previous years to help us, especially last season when we had a vital run-in and did well.

"It is a similar situation and we are determined to keep that fourth position."