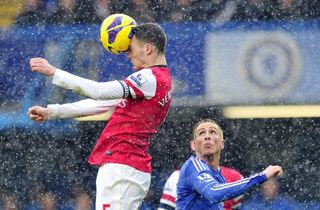 The 28-year-old has reportedly shown an excellent attitude in training as he patiently waits for his chance, and Mertesacker has hailed his contribution off the pitch.

"Laurent, Thomas and myself I think we push each other to good form," Mertesacker told Arsenal Magazine.

"At the moment it is linked to me and Laurent, but I have to say that Thomas is a role model for everyone here.

"Not just because he is the skipper, but in the way he communicates, handles his situation when he's not playing.

"People always speak about those who are in the team, but you have to mention the players who are not involved in the starting XI, but who have the right influence on the rest of the team."

Germany international Mertesacker stated that the trio are all comfortable playing alongside each other for Wenger's table-toppers.

"We are good centre-backs," he added.

"It takes some time to get used to each other on the pitch, and feel comfortable with the situation on the pitch.

"At the moment we know each other well, and how we behave on the pitch. We know how to cover each other, we know how our partner will handle the key moments."

Arsenal are still coming to terms with the news that forward Theo Walcott will miss the rest of the season with a cruciate ligament knee injury.

Walcott, who will also miss the FIFA World Cup in Brazil, is in a positive frame of mind though, according to former Arsenal goalkeeper Bob Wilson.

"Having been at the Spurs game live I watched a recording on Monday, and only then did I realise how well Theo played in the central striking role," Wilson told Sky Sports News.

"I was in the process of texting congratulations to him when I heard about the anterior cruciate injury. I did text him to say how well he played and that we were thinking of him and - as you'd expect because he's such a good guy - I got a very, very positive response.

"It wasn't a long message, but the main line coming through was 'I will get through this'. He's a positive lad still in his early 20s, and you think of Aaron Ramsey with career-threatening injury he had (a broken leg in 2010) and how well he's come through.

"I know the treatment he'll get and all the positivity he has. We wish him well."