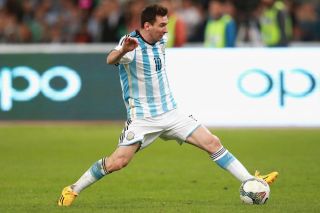 A Diego Tardelli brace wrapped up the win for Brazil over their fierce rivals in Beijing, despite Argentina dominating possession for large periods.

Tardelli took advantage of sloppy defending in the first half before heading home unmarked in the second, with Messi missing a penalty in between.

The result marked the first defeat of Martino's reign, the former Barcelona coach having taken over from Alejandro Sabella in August.

Messi feels the World Cup finalists will continue to improve once they get used to Martino's methods.

"The team now has another coach with different ideas - he was trying new things and that takes time," Messi told TyC Sports.

"Little by little the team is going to get what he is looking for.

"The match was defined by two errors. First the bad clearance, which cost us a goal, and then I could not get the penalty. If I had converted it, it would have been a different game.

"They [Brazil] wanted to defend and go out on the counter, and at 2-0 there were already spaces."