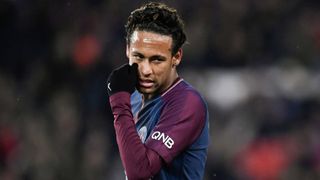 Paris Saint-Germain defender Thomas Meunier has described fans who booed Neymar during his side's win over Dijon as "disgraceful".

Brazil star Neymar scored four goals, including one spectacular solo run and finish, as the Ligue 1 leaders cruised to an emphatic 8-0 victory at Parc des Princes on Wednesday.

However, the forward was jeered by some supporters after he refused to allow Edinson Cavani to take the penalty and score his side's eighth, despite the Uruguay striker needing only one goal to become the club's all-time top scorer on 157.

Meunier believes it was unfair to react in such a way, especially given Neymar's overall performance in the commanding win.

"I understand the disappointment but I find this very disgraceful from the fans," he said when asked about the incident.

"If you want to boo him, why do you clap and cheer him when he goes past four defenders to score?"

It is not the first time penalty duties have led to a disagreement between Neymar and Cavani. In September, the former Napoli striker refused to let Neymar take a spot-kick against Lyon, only to see his own effort saved.

Meunier, however, does not expect the latest incident to have any long-lasting impact and is confident Cavani will break Zlatan Ibrahimovic's goalscoring record soon.

"To me, it's a minor detail," he said. "When you look at the score, whether or not Neymar leaves it for Edi is no big deal.

"We all know that Edi will beat the record and by a lot. The player meant to take penalties is Neymar so I don't think Edi will have something against Neymar. It's just how it was written on the paper.

"So, as professionals, we must consider the goal as one for the team, more than for Neymar or Cavani on their own."