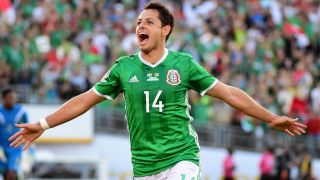 Javier Hernandez broke Mexico's all-time goalscoring record as his team were stunned 2-1 by an understrength Croatia in an international friendly.

Hernandez came off the bench to score his 47th Mexico goal, surpassing Jared Borgetti for the record with a header at the back post.

But the Bayer Leverkusen star's record-breaker came in a loss in Los Angeles on Saturday as a Croatia squad of mostly domestic-based players, many featuring in their first international games, claimed a surprise win.

Duje Cop and Fran Tudor struck in the space of two minutes in the first half for the visitors, who had Mile Skoric sent off late.

The result ended Mexico's nine-match unbeaten run as they started a busy period which includes World Cup qualifiers and the Confederations Cup.

The likes of Hernandez, Carlos Vela and Andres Guardado were used off the bench by Mexico coach Juan Carlos Osorio.

Mexico made a lively start and threatened from wide areas in the opening exchanges, although Croatia held firm.

The visitors turned the game in their favour in the space of two first-half minutes.

Cop opened the scoring in the 36th minute, Tudor beating goalkeeper Guillermo Ochoa to a chipped pass before squaring for the Sporting Gijon forward to tap in.

Tudor capitalised on a defensive howler to double the lead.

The Hajduk Split man read a Diego Reyes pass intended for Ochoa, intercepting before rounding the goalkeeper and finishing for his first international goal.

Hirving Lozano threatened to start the second half before Croatia goalkeeper Lovre Kalinic tipped over a deflected free-kick from Guardado.

Kalinic was needed again to keep out an Oribe Peralta header in the 65th minute before Skoric saw red, booked for a second time for a professional foul.

Hernandez made it 2-1 and went past Borgetti when he headed in a Guardado set-piece at the back post, and the hosts should have levelled soon after.

A cross from the right was met by the unmarked Hector Moreno, but he headed straight at Kalinic as Croatia held on.