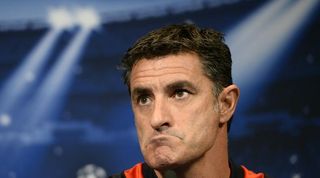 The Greek club guaranteed they would advance from Group C with a 3-1 home win over Anderlecht in Piraeus - with the visitors decimated by three red cards, and conceding as many penalties.

Anderlecht were furious with their treatment from referee Wolfgang Stark, but Olympiakos were good value for their win - which took them to 10 points, and second place in the group behind winners PSG.

"Thankfully everything went well for us as we undoubtedly deserved to win.

"We knew it would be a difficult game because Anderlecht are a good team with good players.

"I expected us to suffer, not so much, but all the trouble was worth it. We deserved to go through."

Javier Saviola was a two-goal hero for Olympiakos, but also blew a penalty chance in the 50th minute - before substitute Vladimir Weiss also failed to score from a spot kick in the 72nd minute.

"If my players had conspired before the match to make me age ten years then I must say they succeeded," Michel said.

"Saviola is a good penalty taker - it was just a bad moment tonight.

"There was a lot of tension surrounding tonight's game.

"The players knew what a great opportunity they had to go through.

"Some players were too afraid to make mistakes.

"We controlled the match when it was 0-0 and after we went ahead."

Michel said his side must work on their errors, heading into the last-16 phase of Europe's prestigious football competition.

"We made mistakes," the Spaniard said.

"Overall I'm very pleased and I forgive the players, but we'd pay dearly for such errors in the knockout phase.

"We were very stressed from the start because of the huge tension surrounding the game.

"We want to work and improve ahead of the knockout stage.

"The players owe me a Valium each after what they put me through.

"I'm very pleased with them all."