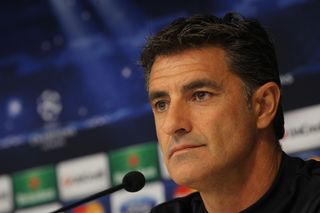 Alejandro Dominguez put the visitors ahead after 29 minutes, before torrential rain blighted the game in the second half making things difficult for both sides.

The draw, which keeps Olympiacos above Benfica in Group C on goal difference, is the Greek side's first in 28 European fixtures, and coach Michel believes his players deserved more than a point.

"We were better than Benfica," he said. "I am proud of my players.

"They displayed their personality and tough mentality. They did not hide and looked Benfica in the eyes.

"During the whole match, they were tactically disciplined, solid in defence and had control of the ball.

"They made the right moves when it was possible to and they switched mode when play became challenging due to the waterlogged pitch.

"I am confident that we will advance to the next round."

The sides meet again for the reverse fixture in Greece in a fortnight's time.