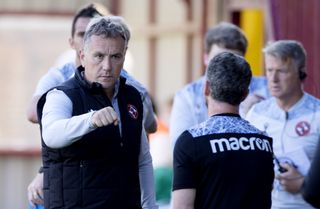 Dundee United manager Micky Mellon has urged his players to harness their growing belief and ensure Scottish Premiership leaders Hibernian have a tough time at Tannadice.

After being held by 10-man St Johnstone in their return to the top flight, United earned victory at Motherwell on Saturday thanks to a purposeful second-half display.

They now face a Hibs side who have netted six times in their first two games but Mellon wants his players to cause the leaders problems on Tuesday.

Mellon said: “We are in a transition and some take a wee bit of time maybe to realise we can massively compete against the better teams in the league.

“I think you saw that grow and grow as the (Motherwell) game went on but all we did was just encourage that belief, even at half-time, and second half we were much better with the ball. So that bodes well for the future.

“We have got to find a consistency in performance in order to try and keep picking up points.

“Tuesday gives us an opportunity to keep moving things forward and we are looking forward to it, another really good challenge, but we believe with the talent we have in the group it will be a big challenge for Hibernian as well. We are well prepared and enjoying our football.

“We are going out there and trying to make a right good fist of trying to make a serious impact in the Premiership. We are at home and certainly heading in the right direction so it should make for a really good game.

“I know it’s going to be a tough game but I believe that they know that as well. And anyone who comes to Tannadice should expect a tough game because Dundee United in their own right are a big club in Scotland.

“So we have to make sure we make it that way any time we play against anybody at Tannadice.”