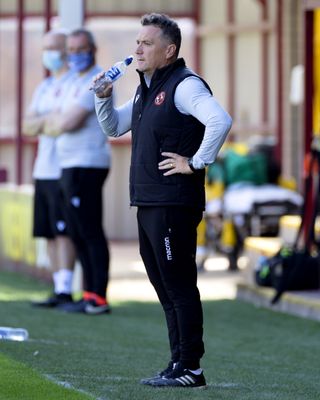 Experienced defender Mark Reynolds grabbed the only goal against his former team but United were well served up front with 21-year-old Louis Appere the oldest player in a trio with wide players Luke Bolton and Logan Chalmers.

Mellon made a bold decision to leave Nicky Clark on the bench with Lawrence Shankland missing with a minor ankle knock, but his faith in youth was vindicated.

🗣 "We'll make sure that's up for goal of the season because it doesn't really happen very often."— Dundee United FC (@dundeeunitedfc) August 8, 2020

“It’s important for Scottish football that we look to give these young players the opportunities to have a blast at it,” Mellon said. “I thought young Louis and Logan were fantastic and all through the team we were very young.

“But we don’t count age as an obstacle in playing. In Dundee United’s history, they have always dipped into their own academy for recruitment and it will be no different when I’m here.

“We are blessed that we have some very good young boys who can come and handle this type of football and that’s what we will continue to do.”

Motherwell manager Stephen Robinson is looking for the right combination up front after a second 1-0 defeat of the season.

Just as against Ross County, Christopher Long took an extra touch when presented with a chance and Jake Hastie was taken off at half-time after an ineffectual display. Sherwin Seedorf was again the liveliest of the front players Robinson used – he also brought Tony Watt, Jordan White, Jermaine Hylton and his son, Harry Robinson, off the bench.

Robinson, who will again be without the suspended Callum Lang against Livingston on Wednesday, said: “I’m toying about with the front three, you can see that.

“I have no options at the back, I have lost four left-backs now. We have plenty of options in midfield. Our front three is my problem, finding the right combination.

“Callum Lang gives us that balance on the left-hand side, he’s a hybrid between a striker and a wide player like we had last season with Devante (Cole) and James (Scott). So once he’s back he solves that problem for me.

“It’s up to other people to step up. I’m stating the obvious when I say we haven’t found the perfect combination.

“The boys that are playing, Long and Hastie, haven’t got minutes in their legs yet and they look like that at the moment.”

Hastie has been snuffed out in both games since returning from Rangers on loan and lost his footing on several occasions on the lush Fir Park turf.

“I just needed more,” Robinson said. “We needed a change, we were getting nothing from Jake and I haven’t got time for that. I have to make decisions and I made that decision.

“We have got options but they have to get fitter and prove a point. And we need to be more streetwise in the final third.”