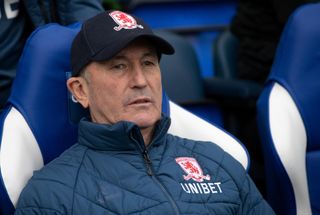 Middlesbrough are looking for a new manager after deciding not to renew Tony Pulis’ contract following the club’s failure to win promotion back to the Premier League.

The Teessiders announced that they had parted company with the 61-year-old, whose existing deal was due to expire on June 30, on Friday morning less than a fortnight after finishing in seventh place in the Sky Bet Championship and missing out on the play-offs.

A club statement said: “Middlesbrough FC can confirm that the contract of manager Tony Pulis will not be extended.”

His departure comes as no surprise with the club’s fans having voiced their disapproval of his style of play, and Pulis himself hinted that his days might be numbered.

Boro were in contention for one of the automatic promotion spots for long periods of the campaign, but a run of six successive defeats in March and April saw them slide down the table and they ultimately finished in seventh place as Derby pipped them to the final play-off berth.

Pulis was drafted in by chairman Steve Gibson in December 2017 after the dismissal of Garry Monk, who had been allowed to invest heavily in the likes of £15million striker Britt Assombalonga, Martin Braithwaite, Darren Randolph and Ashley Fletcher.

He was charged with the task of taking the club back into the top flight after their hard-earned return had lasted just a single season, and although he failed – his side lost to Aston Villa in the play-off semi-finals last season – he leaves with the best wishes of the man who employed him.

Gibson said: “I’d like to thank Tony for his hard work and commitment over the past 18 months. He has been a joy to work with and a complete gentleman.

“Two years ago, we invested heavily in the squad in terms of transfer fees and salaries in an attempt to regain our Premier League status. This happened before Tony’s arrival.

“Over the past 18 months, Tony has been proactive, not only in the ambition to win football matches and promotion to the Premier League, but also in addressing our financial position in order to comply and respect the Championship Fair Play criteria.

“He has ensured that the club is stable and strong for the future. He leaves us in excellent condition.

“Tony’s backing of our Academy has seen many youngsters make their first team debuts. I am sure that Dael Fry, Lewis Wing, Marcus Tavernier, and Nathan Wood will be grateful for the faith he has shown in them.

“I’m sorry to see Tony leave, but our friendship and my gratitude will remain. Tony and his family will always be welcome at Middlesbrough Football Club.”

Boro’s parachute payments following relegation have now stopped, and they could adopt a more radical approach as they look for a replacement with former England defender Jonathan Woodgate, currently first-team coach at the Riverside, among the front-runners.