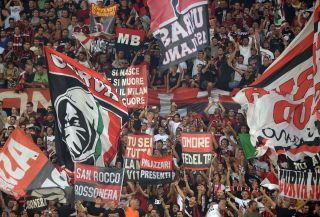 They were warned by the stadium announcer to stop but the chants continued, with Galliani insisting that Milan had done everything they could to control the fans.

The club may be forced to close sections of the stadium, but Galliani hopes that will not have to happen.

"I hope and pray that this is not the end of the Curva Sud," he told the Corriere dello Sport. "It is not for me to judge, there is a sports court and degrees of appeal.

"We will segment the Curva Sud because the choruses always come from a particular section.

"I do not think that a society can be continually punished if 50-60 people continue to sing certain songs.

"We do not know what to do. I hope that this story is over and that we find a way to strike those directly responsible."

Following previous incidents Milan were given a €50,000 fine and ordered to play the match with Udinese behind closed doors – however, proceedings were suspended, enabling fans to attend the game.