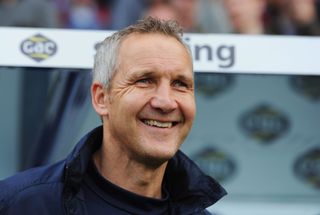 Millen, who was placed in temporary charge following the departure of Ian Holloway, led Palace to a 2-0 home defeat at the hands of Arsenal on Saturday.

But the former Bristol City manager revealed he is yet to hold any talks over his long-term future.

"No I haven't (been given any guarantees)," he told Sky Sports. "I have not really had that discussion with the chairman.

"I was proud to be asked to take over the team against Arsenal and enjoyed it, so I think it will be a case of the chairman decides on who he wants to bring in and the next question will be 'do I fit into that?'

"I have been here before. I am experienced now. I know how football works.

"If I am asked, I would love to stay and work at this football club.

"The most important thing for me is you trust the people you are working with and people know me well enough in the game to know I work with people and I trust them.

"That is how I would expect it to be if I was the manager."

Tony Pulis is currently the bookmakers' favourite for the managerial vacancy at Selhurst Park, with Chris Coleman and Martin O'Neill also among the frontrunners.