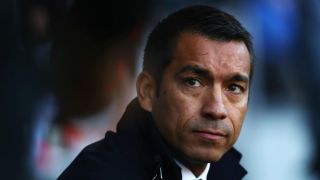 Giovanni van Bronckhorst rued Feyenoord's carelessness after they were blown away 3-1 by Napoli in the Champions League.

The Eredivisie side defended poorly throughout, gifting Napoli their goals and missing a penalty of their own through Jens Toornstra.

Sofyan Amrabat belatedly netted a consolation, but Van Bronckhorst acknowledged that it was too little, too late for his injury-hit side.

"We conceded a goal straight away, but we remained in the game until half-time," the coach said. "After that, we made two mistakes and missed a penalty.

"In the Champions League, it's all about moments and we made too many individual errors.

"Admittedly, it is difficult at the San Paolo. We expected Napoli to play like this. After the goal, we tried to stay solid, but we had some unlucky situations and errors.

"Napoli play football very easily and they are talented. Unfortunately, with so many of our players missing, it made a big difference."

"This really was unnecessary," he said. "We were really naive for their second and third goals - then you just give yourself no chance in the match.

"We do not have time to develop as a team. To have talent is nice and all but, in the Champions League, you just have to be there. This is so frustrating.

"But what can you do about it? You can fight, but there is not much more you can do."