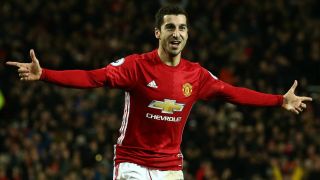 He may be known for his silky skills but Manchester United midfielder Henrikh Mkhitaryan is using his inner beast and monster to succeed in the Premier League.

Mkhitaryan made the big-money move from Borussia Dortmund to United in the off-season and the Armenian has shown flashes of his brilliance.

The 27-year-old has scored 10 goals in all competitions – four of those in the Premier League – as he attempts to adapt to life in England.

"What have I learned? I think the pace, the quickness and the strength because, being here, you have to adapt to the English Premier League and to the football. That is what I am doing now," Mkhitaryan told Inside United ahead of Sunday's trip to Tottenham.

"I am really different on the football pitch. I try to be like a beast or a monster! I fight for every ball and try to do my best.

"Outside of the pitch, I am more quiet and more humble, and I don't like to be very aggressive or anything like that."

Mkhitaryan has been an important contributor for United, who have the chance to qualify for next season's Champions League after reaching the Europa League final.

Standing in the way of United and a Champions League berth are Ajax on May 24, and back-up goalkeeper Sergio Romero played a key role en route to the Stockholm showpiece.

Romero has been tasked with cup duties by manager Jose Mourinho this season as number one keeper David de Gea exclusively features in the Premier League.

While games have been hard to come by, Argentina international and former Sampdoria keeper Romero could not be happier at Old Trafford despite interest from Italy.

"I'm at a big club, for most of my career I have played in smaller teams," Romero said.

"Whatever happens in summer I still want to be here, fighting for a place. I wouldn't mind finishing my career here but you never know what will happen.

"I want to go to the World Cup in Russia with the national team, so I need to stay confident and in contention."