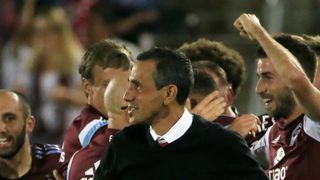 The Rapids entered the match at the bottom of the Western Conference standings with three points from four games in 2015, but dominated second-placed Dallas to notch their maiden win of the campaign.

Dillon Powers and Gabriel Torres led the way for Colorado in Texas, as the visitors scored two goals in each half.

The victory took the Rapids to seventh in the West's standings with six points, just outside the play-off berths, while Dallas (10 points) remain second, although Real Salt Lake and Sporting Kansas City (both eight) have games in hand on Oscar Pareja's team.

Colorado started the season with three consecutive goalless draws before losing 2-0 to New England Revolution last week, but Pablo Mastroeni's side finally ended their scoring drought in the second minute at Toyota Stadium.

In the Rapids' first attack of the match, Powers was left all alone on the right wing and his cross was poked into the net by Dominique Badji.

Powers got in behind Dallas' defence again in the 43rd minute and smashed the ball home from a tight angle to cap off a fine first half for the visitors and their 24-year-old midfielder.

After the break, Torres became the Rapids' instigator, with the Panamanian forward finishing smartly from Juan Edgardo Ramirez's lay-off in the 70th minute.

Substitute Dillon Serna completed Colorado's win in stunning fashion with five minutes remaining, playing a one-two with Torres, before launching the ball into the top corner from 25 yards.