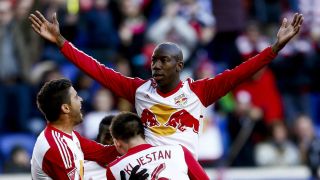 The hosts moved within two points of the MLS Eastern Conference leaders after running riot at Red Bull Arena, with the home side moving ahead 3-0 by the 41st minute.

To compound matters on a disappointing day for City, head coach Patrick Vieira was dismissed to the stands in the first half for an angry reaction to a refereeing decision, while Ethan White was sent off for a second bookable offence in the closing stages.

It could have been a different story had David Villa not dragged wide when one-on-one with the score at 0-0, and Wright-Phillips showed more composure at the other end to coolly finish past Josh Saunders to round off a fine Red Bull move in the 20th minute.

Ronald Zubar powered home Sacha Kljestan's corner three minutes later and the latter made it 3-0 from the penalty spot after Frederic Brillant fouled Alex Muyl in the area.

Thomas McNamara's fine long-range effort two minutes before the break gave City brief hope of a second-half comeback and then struck the woodwork with another effort from distance shortly before the hour.

But Red Bull quelled the threat and 20 minutes from time talisman Wright-Phillips reached Muyl's flick on to round Saunders and slide into the bottom corner.

In the Western Conference, Sporting Kansas City moved into the play-off positions with a 3-0 win over Seattle Sounders at Children's Mercy Park.

Dom Dwyer scored in either half, while Jacob Peterson netted in first half injury time.