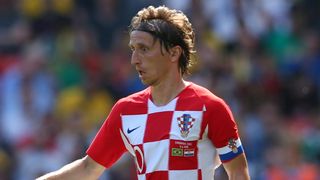 Real Madrid midfielder Luka Modric is the standout star in Croatia's richly-talented final 23 that will attempt to go deep at the World Cup.

Club Brugge defender Matej Mitrovic, on loan from Besiktas, was the only player culled on Monday as head coach Zlatko Dalic settled on the squad that will look to reach the knockout rounds for the first time since their third-place finish in 1998.

Though beaten 2-0 by Brazil in a friendly at Anfield on Sunday, Croatia's depth of talent will have them confident of atoning for a disappointing exit in the group stage in 2014.

Their first Group D fixture in Russia is against Nigeria on June 16 before meetings with Argentina on June 21 and Iceland five days later.