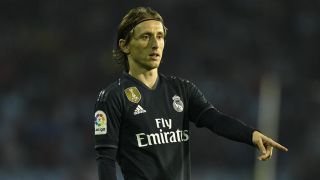 Croatia coach Zlatko Dalic came to the defence of Luka Modric after Real Madrid's poor start to the season and said the midfielder has been unfairly criticised at the Santiago Bernabeu.

Madrid are sixth in LaLiga after losing four of their 12 matches so far this term but have recovered some form in recent weeks under caretaker coach Santiago Solari, winning their last four games in all competitions.

Modric is in the Croatia squad for their Nations League matches against Spain and England and Dalic revealed that he had spoken to his captain ahead of the fixtures.

"We talked a few days ago," Dalic told reporters.

"Luka is aware that in football there are oscillations, that after playing brilliantly for a whole year, he cannot always be in shape and always be the best.

"When Madrid loses a match, then they look for the culprit among the foreigners, so they blame Luka, [Toni] Kroos or someone else.

"At the end of the day, Luka is the best player in the world."

Croatia will hope Modric can help them bounce back from the 6-0 defeat they suffered against Spain in September and improve on their 0-0 draw with England in October.

Dalic's men are bottom of League A Group 4 with one point but have a game in hand on England and Spain, who have four and six points from three outings, respectively.

"I think we have a much better mood and form than in that first game," said Dalic, reflecting on defeat in Spain. "The Spaniards have since lost to England. We need two victories.

"I expect a full stadium, victories and the points that will keep us in contention for the European Championship."