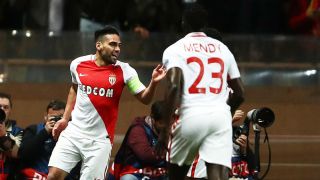 Monaco were rewarded for a classy display as goals from Kylian Mbappe, Radamel Falcao and Valere Germain secured a 3-1 win over Borussia Dortmund and a place in the Champions League semi-finals.

Teenage France striker Mbappe showed why he is one of the most sought after talents in European football by scoring twice in last week's 3-2 victory at Signal Iduna Park, a match that was postponed by a day following an attack on Dortmund's team bus that left defender Marc Bartra hospitalised.

And it took just three minutes of this second-leg encounter for Mbappe to pounce on a Roman Burki error at Stade Louis II to become the first player to score in his first four knockout-stage appearances.

That set the tone for an enthralling first half, and Dortmund were further up against it when Radamel Falcao headed in his 45th goal in 50 UEFA appearances from a sublime team move.

Marco Reus, who missed the first leg with a thigh injury, swept home shortly after half-time as Dortmund threatened a fightback.

But Monaco ensured there was no way back when substitute Valere Germain scored with his first touch with eight minutes remaining to secure a 6-3 aggregate win.

4 - Kylian Mbappé is the first player to score in each of his first four Champions League knockout games. Wonderkid. April 19, 2017

There will be sympathy for Dortmund, whose coach Thomas Tuchel claimed it was "absurd" to play last week's first leg so soon after the incident with the team bus, and they will wonder what might have been had Nuri Sahin's free-kick not rebounded off the post with the score at 1-0 here.

For Monaco, the result means they reach the last four for the first time since their run to the 2003-04 final and the youth, vibrancy and pace they possess in abundance mean's Leonardo Jardim's men will be a threat to Real Madrid, Juventus or Atletico Madrid.

A five-minute delay to kick-off due to Dortmund - with whom Bartra travelled to the game - being held up in heavy traffic only stalled Monaco's lightning start.

Benjamin Mendy's long-range effort had plenty of swerve but was poorly parried by Burki and Mbappe was typically quick to coolly slot home the rebound.

Much like in the first leg, the action was end to end and Bernardo Silva crashed a free header straight at Burki, while at the other end Sahin saw a curling 25-yard free-kick hit the inside of the right post and bounce clear.

Monaco made the most of that let-off and were 2-0 up in the 17th minute. Mendy combined with Mbappe to set up Thomas Lemar for a sumptuous cross from the left that Falcao stooped to head past Burki.

Tuchel knew a swift response was needed and he rolled the dice by throwing on Ousmane Dembele - scorer in the first leg - for Erik Durm.

The added pace did help Dortmund enjoy a decent spell of pressure, but they lacked the clinical edge in the final third that Monaco had so devastatingly displayed.

Dembele's presence did pay dividends three minutes after the break, though, as the Frenchman surged to the byline and poked a cross into the area for Reus to smash high into the top-right corner.

Dortmund's urgency to find goals left them exposed at the back and Falcao controlled Jemerson's long punt before wastefully scooping his shot over the crossbar.

But, after several near misses, Monaco finally put the tie beyond all doubt. Lemar intercepted Lukasz Piszczek's pass before quickly releasing Germain, who scored with his first touch 22 seconds after replacing Mbappe to spark jubilant celebrations.