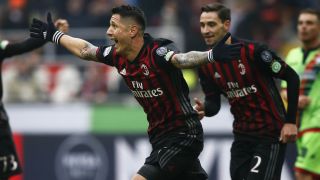 AC Milan boss Vincenzo Montella says striker Gianluca Lapadula is in the middle of a fairytale after his remarkable rise continued with the winning goal against Crotone.

Lapadula dramatically scored with four minutes remaining of his first start at San Siro to seal a 2-1 Serie A win over the struggling visitors.

The 26-year-old had never played in the top-flight prior to joining Milan in June but Montella feels he has already cemented a place in the team - even when Carlos Bacca returns from injury.

"He is in the middle of a great fairytale," Montella said to Sky Italia.

"Over the last month his prospects and status have changed, all of it earned with hard work and sweat. I hope this sporting determination never leaves him.

"Up until two months ago Lapadula had not even made his Serie A debut. Now he is proving he deserves this shirt, with or without Bacca."

Lapadula - who was playing in Italy's third-tier as recently as 2015 - now has four goals in nine league appearances and Milan moved back to within four points of leaders Juventus with their latest victory.

"I haven't looked at the table, we just want to be a team that improves," added Montella.

"It was a difficult match, as we had predicted, as Crotone know how to sacrifice themselves for the team.

"I actually liked the first half more than the second. We slowly got more impatient, but still created many chances and I think at the end of the day it was a deserved win.

"I compliment Crotone, but above all Milan, because this was a hard-fought win. Serie A is where you risk losing these games. I feared we might underestimate Crotone, that didn't happen and that's important for a coach.

"It's true we must aim higher, but have to take our opponents into account too."

Milan's next match is a big one - they play Scudetto rivals Roma away on December 12.