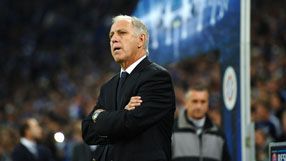 UEFA said on Wednesday that its disciplinary committee had also given the coach a 5,000 euros fine for "improper conduct" due to his behaviour during the 2-2 draw in Gelsenkirchen on October 3.

Girard, who must sit out the home match against Olympiakos on October 24, was also banned for a further game, however, this was suspended for a probationary period of three years, UEFA said.

The French champions were also fined 17,000 euros "for the throwing of missiles and fireworks by their fans, and for the improper conduct of the team (five cards or more)."

Montpellier had five players booked and one sent off, but still managed to snatch a draw with a last-minute equaliser.

After the match, Dutchman Stevens said he had not seen Girard's insult when it happened but witnessed it on television later.

Stevens said he complained to Girard during the match over his incessant protests to the referee.

"He demanded a yellow card every time we gave away a free-kick and that is something you just don't do, it's not fair," Stevens said.

Girard said that Schalke had "not respected us" and paid with the last-gasp equaliser.