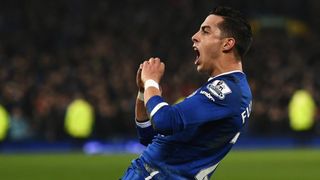 Everton defender Ramiro Funes Mori is planning to make it as difficult as possible for Phil Jagielka to reclaim his place in the starting line-up.

Mori scored the first goal in Everton's 2-1 win over Manchester City in the first leg of the League Cup semi-final as captain Jagielka watched on from the bench, and the Argentinean has no plans to leave the starting line-up any time soon.

Jagielka is slowly returning from a knee injury suffered in October.

"He was injured and in my moment I had to come in and play and take advantage of my time on the pitch," Mori said.

"He is the captain but I have done my job so he has to come back again and play for a spot. We will both have to fight for a place."

Mori said he had enjoyed playing with promising youngster John Stones, and believes he has become a better player for the experience.

"He is a top player and has a lot of quality and I think I am playing with a great central defender," he said.

"We have become more confident as we have got to know each other and that has produced positive results.

"I speak a lot with John during the game and we talk to each other a lot so we can cover each other's backs."