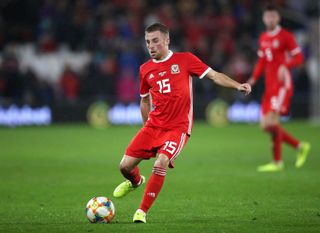 Joe Morrell admitted he owed a first Wales cap to his former Lincoln boss Danny Cowley after he lost a club manager and made his international debut on the same day.

Morrell impressed as Wales beat Belarus 1-0 in a friendly in Cardiff, his ball-winning abilities evident when he started the move which led to Daniel James’ first-half winner.

But the on-loan Bristol City midfielder said it would have been impossible without Cowley, who left Lincoln on Monday to take over Sky Bet Championship outfit Huddersfield, offering him the opportunity of first-team football this season.

“Going to Lincoln is the reason I’m here,” said Morrell, who was an ever-present for the Imps in League One this season until the international break.

“If I was at Bristol City and not playing like last year I wouldn’t be in this position.

“The gaffer (Ryan Giggs) is big on players that are playing regular football and I’ve loved every minute at Lincoln.

“They’ve got to take a lot of credit for this. The manager and his assistant (Cowley’s brother Nicky) have been excellent for me.

“They were a big reason why I joined in the first place. In terms of bringing on my game in the last few months they’ve been spot-on, and I’ll always remember that.”

The Cowley brothers joined Lincoln in May 2016 after non-league success at Concord Rangers and Braintree.

Since then Lincoln have become the first non-league club to reach the quarter-final of the FA Cup in over a century and won promotions, rising from the National League to fifth in League One.

“I won’t be surprised to see them go right to the top,” Morrell said.

“I think it’s only a matter of time – two or three years maybe – and they’ll take that next step to the Premier League.

“The intensity and attention to detail that they work with is fantastic. If I’m honest I can’t see them being at Huddersfield for too long.”

Morrell played nearly 40 games on loan at Cheltenham in the 2017-18 campaign but has found it difficult to break through at Championship side Bristol City.

The 22-year-old has made only six appearances there and is yet to start a league game for the Robins.

“It hasn’t always been plain sailing through the past four or five years of my career,” Morrell said.

“So moments like making my senior debut are not just for me. They are for my family and friends because they’ve stuck with me.

“I’ve probably played 50-plus times for the youth age groups, and you train for all of them for that one senior game.

“It was a good performance to get the win and I just hope it’s the first of many.”